On Wednesday, June 7, 2022, in Novi Pazar, contracts were signed with the beneficiaries of support in the form of economic empowerment, which were selected within 4 public calls that were recently realized within the project New Jobs Novi Pazar.

Contracts were signed with:

After signing the contracts, we will start with the realization of the training, procurement and distribution of grants, as well as with the provision of mentoring support to associations in the development of social entrepreneurship. 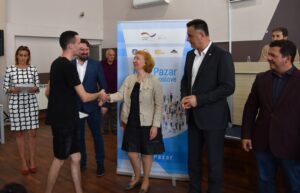 The project “NOVI PAZAR FOR NEW JOBS” is implemented within the program Inclusion of Roma and other marginalized groups – Initiative for Inclusion 3, funded by the German Development Cooperation, and implemented by GIZ.

The project is implemented by the City of Novi Pazar in cooperation with the Regional Development Agency of Sandzak SEDA, the association Merhamet Sandzak and the citizens association IDC.