The final conference of the project “New Opportunities for Dignity of Youth in Serbia” was held on January 30th in Belgrade. The participants had the opportunity to get information about Danish-Serbian cooperation in the field of employment and employability of young people, while the social partners presented their work on the project and the concrete measures taken to improve the conditions of youth work in Serbia. Our guests from the European Commission and Solidar foundations talked about good practices from EU Member States.

Minister of Labor, Employment, Veteran and Social Affairs Zoran Djordjevic said that according to data from December 2018, the share of young people in the number of unemployed amounted to 19.9 percent, while in 2017 this figure was 22.4 percent. He also pointed out that opening new jobs, retraining and additional qualification trainings are important in order to give the opportunity to young people in the labor market.

Claus Larsen Jensen of the Forum for International Cooperation (FIC) from Denmark said youth unemployment in EU countries is around 16 percent, and earlier it was over 20 percent. He pointed out that some of the good experiences applied in Denmark can serve Serbia as a good example. Danish Ambassador to Serbia Anders Hougård said that the dialogue of social partners is a good way to create a consensus and determine the direction that the state take in employment policies.

President of the United Trade Unions “Independence” prof. Dr Zoran Stojiljkovic said that it is important to enable dignified instead of precarious and unstable work, as well as quality and sustainable employment, which means that young people do not work on the black market and get decent income. Stojiljkovic pointed out that highly educated and high-quality workers in Serbia will be retained with an appropriate salary and a perspective position.

Vice President of the Council of the Confederation of Autonomous Trade Unions of Serbia Dusko Vukovic said that it is necessary to find a common language in order to create an environment that would correspond to dignified work. He agreed that it is not wise to just copy successful employment models from other countries, but to adapt these models according to the domestic living and working conditions.

Representative of the Directorate-General for Employment, Social Affairs and Inclusion at the European Commission Ida-Maria Falesen and Federica Rosato from Solidar Foundation talked about the policies of the European Union aimed at improving the quality of life and increasing employment of young people with concrete examples from Denmark, Italy and Spain. 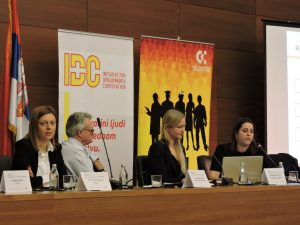 The project “New Decent Job Opportunities for Youth in Serbia” is aimed at promotion of social dialogue and encouragement of cooperation of social partners, all with the aim of joint action in order to find solutions for reducing the unemployment rate of youth in Serbia. The goal of the project, which lasted for two years, was to strengthen cooperation and social dialogue in Serbia through the adoption and implementation of the Agreement of the social partners on creation of opportunities for decent work of young people, signed at the end of last year.

The project is funded by the CISU fund within the program of Danish Ministry of Foreign Affairs. The leading role on the project has FIC from Denmark, a non-governmental organization dedicated to social development and strengthening inclusion. The project partners in Serbia are Serbian Association of Employers, the Confederation of Autonomous Trade Unions of Serbia and United Trade Unions “Independence”. The implementation of the project was coordinated by the Association of Citizens Initiative for Development and Cooperation.