IDC AND LOCAL COMMUNITIES: Plant for the Community of Lucani and School of Journalism for Children and Youth in Cacak

Home > Actual > IDC AND LOCAL COMMUNITIES: Plant for the Community of Lucani and School of Journalism for Children and Youth in Cacak

On Wednesday, April 17, IDC hosted Mr Nebojsa Racic, a representative of the Municipality of Zollikon, donor two IDC projects, the project School of Journalism for Children and Youth and the project Plant for the Community of Lucani.

A partnership agreement on the implementation of the project Plant for Community of Lucani was signed with the municipality of Lučani, and the implementation will begin in May. Within this project we will provide continuation of support for the households that were supported in the framework of the last year’s project with establishing raspberry plantations. Successful and sustainable plantations will be equipped with anti- hail nets. Within the project, a certain number of new beneficiaries will be supported through provision of seedlings of raspberries, blueberries or strawberries and accompanying equipment for establishing new fields. In addition to the funds provided by the Municipality of Zollikon  in the amount of 15.000 CHF for the continuation of this cooperation and the Municipality of Lučani has appointed the same amount from its funds. 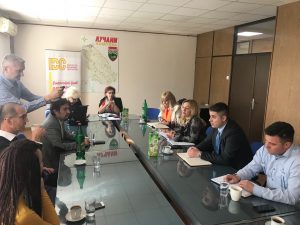 In Čačak, at the new premises of the City library Vladislav Petković Dis, a presentation of the project School of Journalism for Children and Youth was held. Workshop participants had the opportunity to apply their knowledge through the realization of an interview with the representative of the municipality of Zolikon and IDC Executive Director Miodrag Nedeljkovic. The realization of the project was supported by the City of Cacak, with whose representatives we had the opportunity to meet after the event in the library. 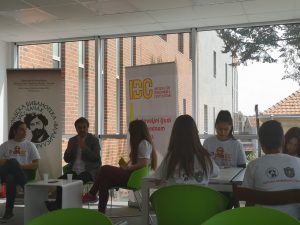 The continuation of the support of the municipality of Zolikon is based on the success and significance of the results of the last year’s project, and it is our task to once again justify given trust.