Our executive director Miodrag Nedeljkovic, as one of the representatives of Serbian civil sector, attended the high-level political forum (# HLPF2019) in New York, which is the United Nations central platform for monitoring and evaluating the performance of the 2030 Agenda and the Sustainable Development Goals.

The Republic of Serbia was represented at this forum by a Delegation led by Minister without portfolio in charge for Population Policy, Slavica Djukic Dejanovic, who presented the first Voluntary National Report on the Implementation of the Sustainable Development Goals.
In earlier interviews, the minister explained that governments were given the task
to work together with the civil sector, academia, the professional community, business sector, local self-governments and the media on the Agenda 2030 report and implementation of the Sustainable Development Goals. 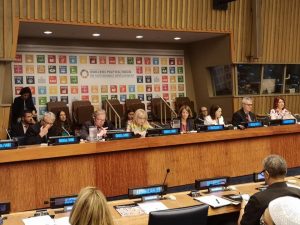 The preparation process was followed by comments from civil society organizations regarding the fact that the report was delivered late and with a short deadline for comments as well as for the content itself. The Minister said on this occasion: “In this kind of activities, participation and cooperation with civil society is unconditional” and added that civil society organizations made grounded remarks, objectively stating what the factors of acceleration are and pointing the biggest issues.
Although the civil society observations and comments in the UN are strictly limited to 2 minutes, the questions prepared by the representatives of civil society covered the key problems of Serbia, but these issues were only partially heard. Specifically, UN practice favors comments and questions from representatives of governments of other countries. After the report was presented, comments were made by representatives of North Macedonia, Norway, Switzerland and Slovakia. Representatives of civil society were given 2 minutes for the first comment and questions, covering topics of violence against women (especially domestic violence and violence against women activists) and environmental threats (including air pollution, loss of biodiversity, change of land use due to investor oriented urban development, etc.), but no questions were answered.
The second comment and question were reduced by the session moderator to just 1 minute, so there was no time to discuss topics such as mass emigration of young people, unemployment among young people, commercialization and privatization of the education system, as well as increase in precarious work due to increased presence of foreign companies supported by national subsidies, as well as issues related to freedom of speech and the media in Serbia.

During their visit to New York our executive director Miodrag Nedeljkovic and Mrs. Alyssa Ghils representing SOLIDAR network  had a meeting with the Ambassador of the Mission of Serbia to the United Nations, Mr. Milan Milanovic and Mrs. Slavica Djukic Dejanovic. 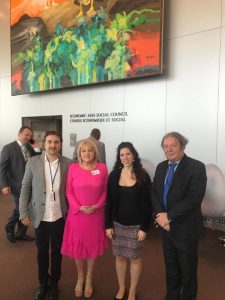 The report is available at the following link:
https://sustainabledevelopment.un.org/content/documents/23471Serbia_VNR_Report_2019_final.pdf?fbclid=IwAR3UGU1XLmDdv6Zyn3BAddbOppk1y0ptvigNwTm4VQRH1h3dgLYytz