On Tuesday, September 17th 2019 in Belgrade, the National Conference “Leaving no one behind in the process of EU integration” was held in Zira hotel. The event was organized by Arbeiter Samariter Bund SEE in cooperation with  IDC as local partner, and in partnership with The Ministry of Labor, Employment, Veteran and Social Affairs of the Republic of Serbia.

The Conference is organized within Social Dimension Initiative (SDI), launched in 2018 as joint endeavor of the ASB and local civil society organizations from the Western Balkans  and supported by a group of distinguished members of the European Parliament. The aim of the project is to enhance dialogue between the civil sector, citizens and political representatives on the necessity for the stronger social dimension of the EU integration for Western Balkan countries.

The conference was attended by representatives of most prominent stakeholders on this issue in the Republic of Serbia. Opening remarks were given by minister of Labour, Employment, Veteran and Social Affairs of the Republic of Serbia Mr. Zoran Đorđević, Mrs. Jadranka Joksimovic, Minister of European Integration, Mr. Sem Fabrizi, Head of the Delegation of the European Union in the Republic of Serbia, Mr.  Thomas Schieb, Ambassador of the Federal Republic of Germany in Serbia.  Mr.  Knut Fleckenstein, Federal Board Chairperson ASB e.V. Deutschland assigned the support of the ASB Deutschland for the implementation of this project and pointed out the importance of SDI for the WB EU integrations process and in general and Mr. Elmir Bojadzic spoke in front of ASB SEE as coordinator of the Action.

Within first panel our program manager Jelena  Andjelic and project manager Igor Kojcic presented the results of our work within the project Social Dimension Initiative! Through mentoring support together with 15 municipalities, selected by the Ministry of Labor, Employment, Veterans’ and Social Affairs, we have developed 45 project proposals in the field of social development and protection. These projects will be part of a regional portfolio of 200 projects developed by local partners gathered around ASB South East Europe and the municipalities across the region. In addition to projects developed by local governments, we also presented Serbia’s socio-economic perspective in the context of EU integrations and the main socio-economic problems we face at local and national level. 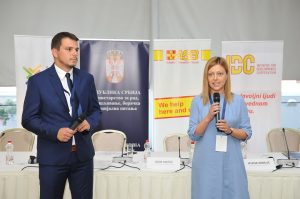 Second panel gathered speakers who represent the main international actors investing in social cohesion in Serbia in previous couple of decades. Representatives of Delegation of the European Union in the RS, UNOPS, GIZ and Standing committee of towns and municipalities presented briefly their current strategic orientations and current resources and action plans.

IRIS Network had the opportunity to present their work within the specially allocated stand for promotional and educational materials. 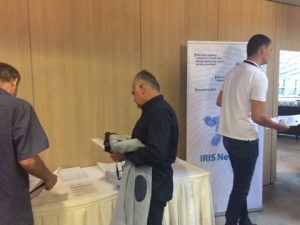