The ministerial conference Leaving no one behind, was held on Tuesday, 6th of November,  in the Palace of Serbia,  within the Social Dimension Initiative (SDI). The conference was a unique event that  gathered all ministers in charge of social policy from the Western Balkan region. Within the framework of the conference, a Ministerial declaration on joint advocacy for the improvement of social policy in the Western Balkans, was signed by Ministers of Western Balkan 6 countries (Serbia, Montenegro, FYRoM, Kosovo*, Albania and Bosnia and Herzegovina.

For more than a decade, the countries of the Western Balkans are beneficiaries of EU funds. Nevertheless, the Western Balkan region continues to struggle with social risks related to poverty, inequality of income, unemployment and other forms of social exclusion. 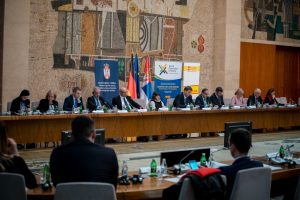 The Social Dimension Initiative began in August 2018 with the aim of improving the social and employment policies of the Western Balkan countries. This regional initiative is the result of the 25-year long humanitarian work of the ASB in this area and the identification of common potentials and obstacles to the social prosperity and well-being of the citizens of WB countries on their way of  EU integration.

Within the SDI will be developed up to 180 ready-to-be-funded social project ideas from 6 WB countries. The conference was organized by the German NGO Arbeiter-Samariter-Bund Deutschland eV (ASB) and the Ministry of Labor, Employment, Veterans and Social Affairs of the Republic of Serbia. The conference was attended by civil society representatives from the region, representatives of EU institutions and national institutions and diplomatic corps.

In the framework of the conference members of the IRIS Network actively contributed and made the voice of the civil society be heard. During the conference, the participants had the opportunity to get acquainted with the work of IRIS network and the efforts of its members at the regional level, as well as well as on local level in Serbia, Bosnia and Herzegovina, Montenegro, Albania and FYRoM. Within the panel EU – Social Perspectives, our program coordinator, Jelena Anđelić, addressed the participants and reminded of the efficiency and flexibility that civil society organizations can contribute with to the implementation of this and similar initiatives being oriented and responding to the direct needs of final beneficiaries. 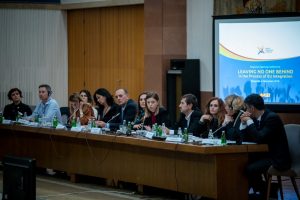 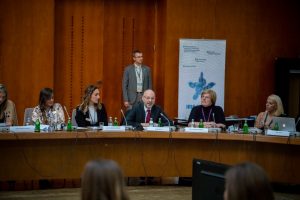