Today we hosted a lecture Swedish model of peaceful labour resolution via the ZOOM platform. The lecture was held by Johan Schmidt, Head of Team Europe at the Olof Palme International Center, who presented the Swedish model of peaceful resolution of labour disputes. The lecture was attended by 60 conciliators and arbitrators from Serbia, as well as representatives of the Republic Agency for the Peaceful Settlement of Labor Disputes, the International Labor Organization in Serbia, the International Olof Palme Center in Serbia and others.

Prior to the lecture the representative of Olof Palme Centre in Serbia, Danilo Milic, welcomed all participants and presented the activities of their office in Serbia. 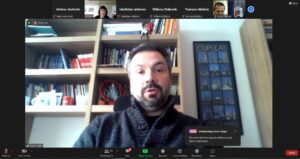 Participants had the opportunity to learn more about the Swedish model, starting from the social context of labour and industrial relations, the labour market situation with the percentage of union representation (90%), as well as employers’ organization (70%), historical framework, characteristics of social dialogue, then on the institute of mediation, collective bargaining and other specifics in this area. Social dialogue is organized on a bipartite basis, and the impressive fact is that 670 collective agreements have been concluded.

In the second part, a large number of participants (62) actively participated in the discussion after the lecture, which showed great interest in how to apply certain segments in the normative and social framework in Serbia in order to increase the applicability of the institute of peaceful settlement of labour disputes, prevention of labour disputes, preservation of social peace and protection of socio-economic rights. 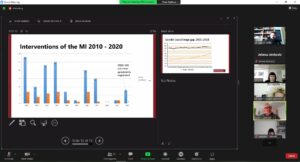 We hope that this lecture represents the beginning of a long and successful cooperation between the social partners, IDC and the Ulof Palme Center in the field of protection and strengthening respect for labor rights in Serbia.

The lecture was held within the project “Joint endeavours of social partners to increase the visibility of the Institute of Peaceful Settlement of Labour Disputes” implemented by IDC funded by Olof Palme International Center, in partnership with the Federation of Trade Union Confederation Nezavisnost, Confederation of Autonomous Trade Unions of Serbia, Union of Employers of Serbia with the support of the Republic Agency for the Peaceful Settlement of Labour Disputes.