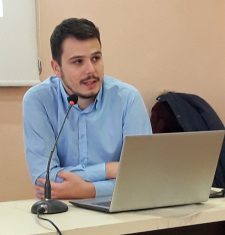 Experienced manager who gets to know the field where his projects are implemented from the most abstract level to the tiniest piece of wood on the ground. A rare combination: endlessly patient and enthusiastic, while listening to him talking to people, it seems to us that he would win the Demosthenes himself in debate. Little Dule and Teodor proud dad.

”Definitely, the best moment of my work at IDC was when the project for repairing damage caused in Ljig, (after the flood) in whose development I participated, was officially approved. To be exact, it was a moment in which Lana called me to let me know that the project application was approved and congratulated me… It was such a good feeling!
It was great as well that, despite all the problems that were happening, projects in Novi Pazar and Tutin for housing for IDPs, refugees, and returnees completed and users got home. ”