At yesterday’s conference in the Hotel Serbia, the fifth project cycle of advocacy and promotion of the institute of peaceful resolution of labor disputes was completed.. The conference was attneded by social partners representatives: Trade union Independence, Alliance of  Independent Trade Unions of Serbia and the Employers Union, as well as representatives of the Republic Agency for the Peaceful Resolution of Labor Disputes. 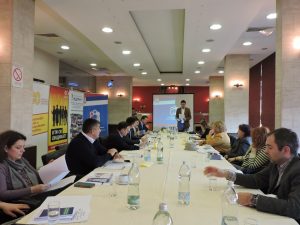 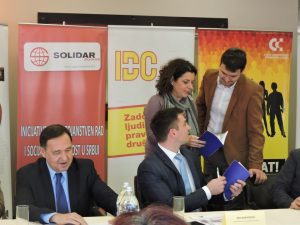 The greatest extent of the common long-term effort of social partners in the previous project cycles was the adoption of recommendations for amendments to the Law on the peaceful resolution of labor disputes made by a group of experts engaged on the project.

This year activities continued not only at the advocacy level, but also in the direction of strengthening the accessibility of this institute and the visibility of the Agency itself. Workshops were held in 4 cities in Serbia, where representatives of employers, together with local company employees, had the opportunity to get acquainted with conciliation and arbitration through a simulated procedure. Before the simulation of the procedure, the participants were introduced to the institute of peaceful resolution of labor disputes and the function of the Republic Agency through educational video that was also created within this year’s project. The video is available online and linked to a test by which anyone who views a video can check the acquired knowledge.

All these materials, together with the discussion forum and other useful contents, are linked within the mobile application: Peaceful Settlement of Labour Disputes. This application, according to the representatives of the social partners and other participants, represents a revolution in the functioning of the state administration. It will soon be available on the google play store, which will bring the accessibility and visibility of the institute and Agency itself, to entirely new level, especially among young people.

The project was supported for the fifth time in a row by Solidar Suisse/Swiss Labour Assistance office in Serbia.