On the 26th and 27th of September IDC spent two days at Divcibare with a pool of stakeholders in the field of social economy. We gathered social entrepreneurs, experts in the field of social economy, representatives of the Association of enterprises for professional rehabilitation, Chamber of Commerce, Coalition for Development of Solidarity Economy (KoRSE), and founders of the SENS network together to jointly review the interest of the participants, primarily social entrepreneurs, in the work of the network of social enterprises in Serbia.

First, we reflected on the actors in the field taking into account the historical perspective. The participants discussed the newly adopted Law on social entrepreneurship and the opportunities and challenges it puts ahead. The KoRSE, which was a member of the working group that took part in drafting the Law and is now a member of the Council for Social Entrepreneurship formed and run by the Government of Serbia, Ministry for Labor, Employment, Veteran and Social Affairs, presented the ongoing work on Program of support for social enterprises. The participants were able to hear and reflect on the challenges the program recognizes and addresses, proposed support measures, and other relevant information. 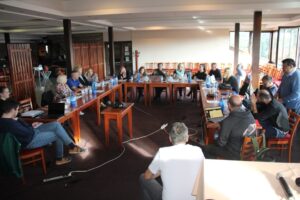 The participants were introduced to examples of good practices in the field of social economy in Europe and the potential of financing social entrepreneurship in Serbia.

In the end, one of the founders of the SENS network Gordan Velev presented the network tackling the issue of why it was founded back in 2011 and what makes SENS today. Through an interactive workshop, the participants tried to reach common ground on how we perceive the structure and role of SENS in the future.

The conclusion of the meeting is that the sector of the social economy needs a network of enterprises. It was agreed that the Association of enterprises for professional rehabilitation will be invited to join the network, as well as redefine the current membership base in terms of companies that are active and interested in membership, as well as to inform them and other social enterprises about the plans for the re-establishment of the network.

The event was organized within the project Strengthening the ecosystem of social entrepreneurship. This project was supported by the Swiss Government project “Together for an active civil society – ACT”, implemented by Helvetas Swiss Intercooperation and Civic Initiatives.

Co-funded by the Erasmus+ Programme of the European Union.