The end of June was spent visiting Dublin, where we were hosted by our partners ISEN (Irish Social Enterprise Network). During the first day of the visit, we had a working meeting of project partners who came from 8 European countries and are working on forming and developing a social enterprise network or working integration enterprise. 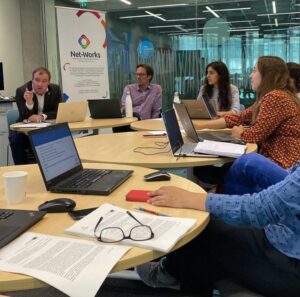 On the second day of the visit, a roundtable was held regarding the working methodology of social enterprises and working integration enterprises. Within the first panel, Mr Richard Gavin, from the Department of Rural and Community Development of the City of Dublin, approached the issues from an institutional perspective and pointed out that the main goals that the department is pursuing are: (i) raising awareness, (ii) support to social enterprises, (iii) policy alignment. He explained how one of the big weaknesses that affect the development of the Social Economy in Ireland is the lack of data. The other two guests approached the topic of the roundtable from the perspective of the social entrepreneurs. Mrs Maggie Clune represented the work methodology of social enterprise PACE, which works on ex-convicts’ social integration. Mrs Claire Downey represented the Rediscovery Centre, National Centre for the Circular Economy in Ireland where the roundtable physically took place. They briefly talked about main activities, target groups, challenges, and working methodologies and reflected on the need for policy influencing and creating a more enabling environment for the development of the social economy. 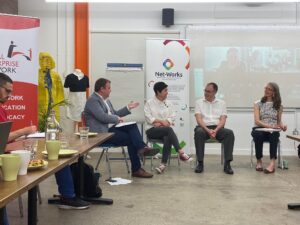 The second part of the roundtable event was dedicated to the exchange of knowledge, ideas, and practice within the project consortium. The participants were divided into groups and each group had a guided discussion on the following three topics: Cooperation between public and private sectors in the social economy ecosystem, Training provided to workers in labour insertion, and the Involvement of workers in the social economy. As the groups were rotating between these three small-scale roundtables each group added on top of what the previous one had identified and discussed on each of these topics.

After the discussion, we had a guided tour of the Rediscovery centre whose functioning has incorporated practical examples of all that is mentioned above within both sessions. Project partners had a chance to get familiar with the functioning of the centre in daily activities, on the level of the centre as a concept of circular economy and as an example of community initiative provided with support by local authorities. 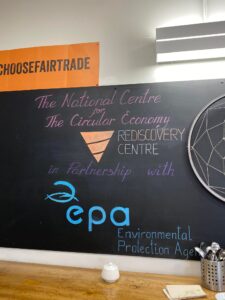 You can read more about Net-works project and this event in the Newsletter or on ENSIE network page.